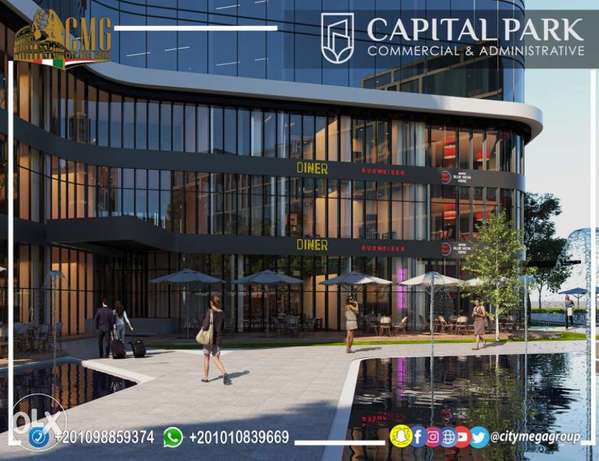 A prestigious investment opportunity awaits you with RAFCO and its distinguished commercial project at all levels.

Capital Park Tower in the New Administrative Capital is located in the Downtown area in plot G38, and it is known to be the largest commercial area in Egypt; As the area includes the largest commercial and administrative projects in the new capital, Capital Park project is implemented by RAFCO and was designed with the best international designs, and it is considered as 3 projects for it in the new capital.

Capital Park tower contains a variety of units including administrative, medical, and commercial units, equipped at the highest level and with the latest international models, and was keen to provide a project that contains services and facilities that occupy about 70% of the project area, and 30% of the building area, Capital Park Tower is located near many areas important.

Capital Park Tower is distinguished by its location; Capital Park project is located in the largest area that includes commercial projects, which is the Downtown area in plot G38, its proximity to vital places and important roads such as:

What are you waiting for?? get services and features inside the latest and most luxurious Capital Park Tower New Capital

Capital Park Tower is designed to consist of 3 underground floors, a ground floor, and 8 upper floors.

The prices were as follows:

The company has been keen to provide multiple payment systems and facilities to suit all customers. You can pay a reservation down payment of 10% of the unit value, 10% as a receipt payment, and the rest in installments over 8 years with a discount when paying in cash.

Book your unit now and you will get an opportunity to invest among all the features and services that each client needs in one place in the most prestigious malls in Capital Park Tower, the capital, it is the best ever.

Capital Park Tower, the Administrative Capital, is offered by RAFCO in the distinguished Downtown area and is considered one of the largest major companies in the Egyptian market, and the company owns many architectural projects. The company was founded by Engineer Ramy Fares, Chairman of the Board of Directors in 2015, which has a long experience in the field of real estate.

It is distinguished as the official sponsor of the largest Egyptian club, Al-Ahly Club. The company owns several residential and commercial projects, through which it has provided distinguished investment opportunities in the capital; Its investment business has reached more than $2 billion so far.

RAFCO does not work randomly, but it has a vision that it wants to achieve, and it wants to become the number one company in Egypt and the Middle East, by providing modern and high-quality communities, by providing it with smart investment solutions, and competitive prices offered with the best payment systems.

The company established the Build Your Apartment for Youth initiative, through which it built nearly 18 projects at affordable prices for all customers.

The company launched its third real estate project, which is Capital Park Tower, which is within the capital, and established a complete multi-use mall for investors, including administrative, commercial, and medical.

Do not miss this opportunity to be part of the most exclusive mall Downtown, the New Administrative Capital.